Please note that we won't be able to dispatch any order between Wednesday 1 February and Tuesday 7 February. More information here
Home > Drinks > Sacrisassi Bianco, 2017
Sold Out 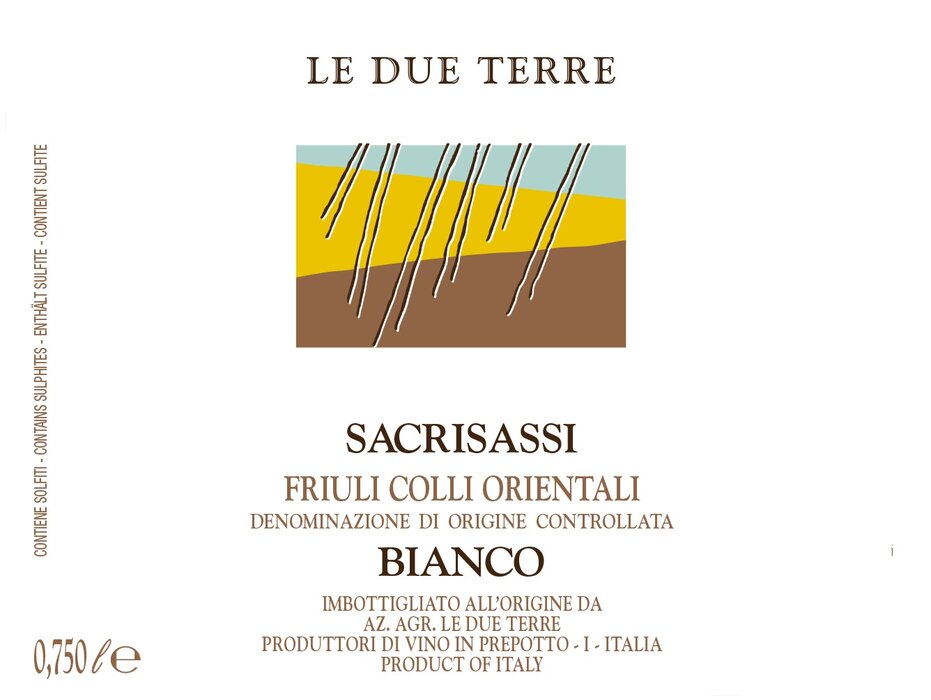 by: Le Due Terre

Harvesting period: first or second week in September, depending on seasonal conditions. Vinification: grapes hand harvested in small crates when ripe, completely destalked and transferred into steel tanks; spontaneous fermentation and maceration on the skins for 7 to 15 days, depending on vintage. Maturation: after vinification the wine spends 21 months in used French oak tonneaux. Bottling: in July, 21 months after the grapes were harvested, in the correct phase of the lunar cycle. Number of bottles produced: 4,000 approx.
Download Pdf
About Le Due Terre

Le Due Terre was founded in 1984 by Silvana Forte and Flavio Basilicata in Prepotto, on the eastern hills of Friuli. The name “Le Due Terre” is a tribute to the terroir of this area, rich in micro elements and characterized by two types of soil: clay and marl (also locally known as ponca), mudstones that tend to progressively crumble into flakes, or small pieces. The winery has always been environmentally oriented, and has developed a natural viticulture method and a natural winemaking style consistent with its commitment to the environment. Thus, work in carried out solely by human hands, and the use of pesticides and chemicals is banned. The weeds and grass management in the vineyards, the conservation of the forests bordering them, and the manual cultivation throughout the year combine to make the ecosystem “react”positively and in synergy whit human presence. Such a care of the vineyards and the environment alike allows for minimal intervention in the cellar during winemaking. The vinification is done according to a non-technological, traditional style, with indigenous yeasts inducing spontaneous fermentation. The wines mature for about 21 months in French oak barrels without racking, so that their integrity and the natural characteristics of the varietals are preserved. At the end of the aging the wines are bottled with the add of a small quantity of sulphites (less then 60 mg/L in total) and after a coarse filtration.
Continue Shopping

Please note that any orders placed between February 1 2023 and February 7 2023 will be processed and shipped starting from the February 8 2023.
Checkout
View basket
Continue Shopping
Share This

Please note that any orders placed between February 1 2023 and February 7 2023 will be processed and shipped starting from the February 8 2023.