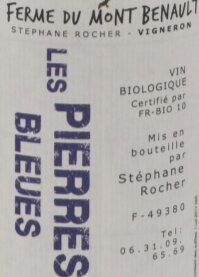 In 2008 Stéphane, decided to leave Paris where he used to work in communication to get closer to his wines roots. In 2010, he found an abandoned large farm with a cellar in Faye d’Anjou and started to make wines in 2011. Stéphane organically grows his vines; the harvest is carried out entirely by hand. He limits inputs in the cellar, with just a little or no sulfur. In 2012, he began to replant the hillside of purple schists, sandstone schists and phtanites with Chenin, Grolleau noir, Grolleau gris. Today Stéphane cultivates 6.5 hectares of vines, including 2.5 hectares of young vines which are starting to produce little by little. He is part of the collective of young natural winegrowers from Anjou called “En Joue Connection”, in which amateurs will recognize many rising stars … Stéphane Rocher enjoys composing natural Loire wines that he wants to be accessible to a wide audience. His wines are pleasant for both amateurs and novices
Continue Shopping