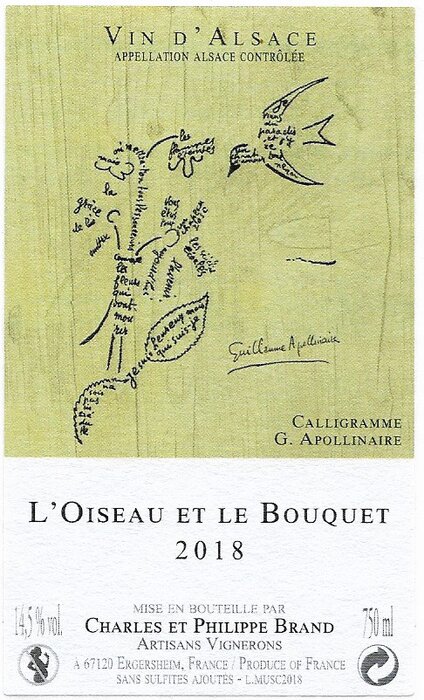 The Domain Brand is situated in the heart of “La Couronne d’or” (Strasbourg’s vineyard), in a village named Ergersheim. It is a familial estate since the 1950’s, founded by Philippe’s grandfather. The domain is in organic farming since 2001 and the harvest 2015 will be certified «Demeter.”. The vineyard is spread on 10 ha with a low yielding, split on three neighborhood commons,Ergersheim, Ostoffen and Wolhxeim, and entirely in organic farming. Philippe took over the domain in 2008, and brought a new life to the vinification, with his experiences from Burgundy at Domaine de Montchovet and in Greece on Peloponnese Island and a stage in Australia,( Barossa Valley) Philippe decided to push further the organic farming to the Biodynamic, and straight away made few vinifcation without any sulfur. Since the vintage 2013 Philippe decided to launch a Natural range of Wine called “Apollinaire”, who is actually the emblem of the domain. All the labels of this range are made with Apollinaire Caligram All this cuvée are made without entrant, the total average of So2 for this range is 20mg/l, and 50mg/l for the Cuvée Apollinaire.
Continue Shopping