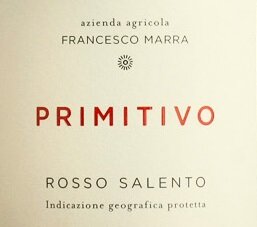 The Francesco Marra Farm covers about 70 hectares in the area of Ugento Lecce and Scorrano of which 45 hectares of secular olive groves while the remaining part is planted with vines. The Farm is entirely conducted with organic farming methods. Compared to the total area planted with vines, only a small part of about 2 hectares is destined for processing. Infact most of the production is sold as certified organic grape. The vineyards used for the production of wine, aged between 40 years for the Negroamaro and 20 years for the Primitivo, are cultivated with espalier and pruned with spurred cordon. The production doesn’t exceed 50 quintals per hectare. As a defense against vine diseases, only copper and sulfur are used according to needs and to climate trends (the copper content in wine is <0,05 kg/lt) as well as sexual confusion for the control of the vine’s moth. The fertilization is represented only by the green manure of legumes and true grasses. The harvest is only manual: grapes are selected and picked by hand and placed in crates. The grapes are harvested at full phenolic ripeness, approximately in the first half of September for the Primitivo and at the end of September or early October for the Negroamaro. The fermentation takes place in 15 hl wooden barrels where the grapes, only destemmed, ferment spontaneously. During fermentation some manual punching is performed when necessary, generally 2-3 times a day. The temperature of fermentation, which is not controlled, reaches a maximum of 30-33 centigrade degrees. After about 10 days the barrels are drawn off and the obtained must continues its alcoholic fermentation in steel tanks. During this second fermentation phase, malolactic fermentation is also activated. At the end of fermentation the wine is kept in steel tanks together with the dregs. Generally in springtime, micro alcoholic and malolactic fermentations are reactivated which are checked with periodic tastings. After about a year and a half, the wine is bottled without being filtered and, if possible, without adding sulphites. en.francescomarra.it
Continue Shopping