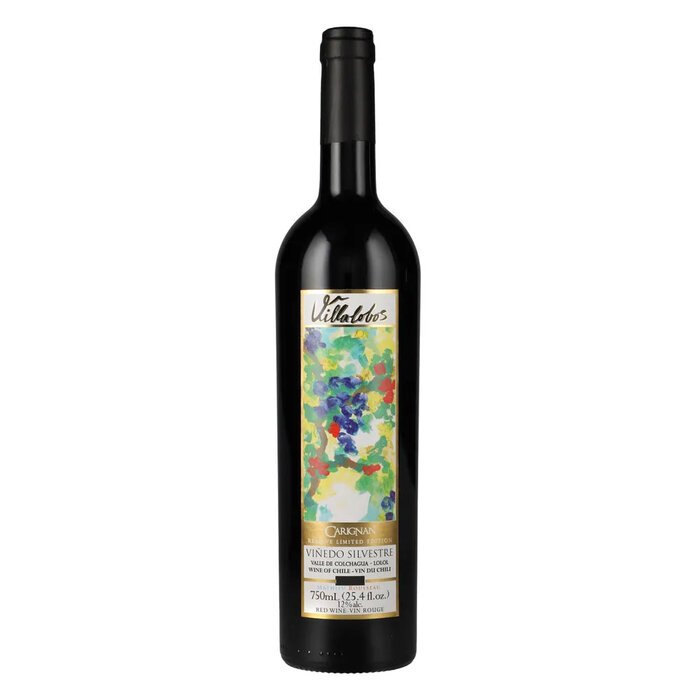 This 70-year-old, non-industrial, organic vineyard continues to be in its wild state, without any pruning, irrigation or the use of chemical products such as pesticides or herbicides. Te vineyard’s distinguishing feature is its untouched wilderness where for over the last 50 years Carignan vines have grown side-by-side native vegetation. This vineyard is quite bio diverse, hosting a wide variety of native fora and fauna, including culen, maiten, quillay, hawthorn and rosehip, among others. The vineyard’s unique surroundings are instrumental in keeping the vines pest- and disease free. Natural decantation by gravity.
Download Pdf
About Villalobos Wine

The main varietal of our vineyard is the carignan whose feet were planted in the 1940s and 1950s in the Villalobos family estate, located in Lolol, in the Colchagua valley and which is a characteristic land of the non-seaside area. irrigated with hot days accompanied by short, cool nights in the summer. These vines have never been treated in a traditional way, however they have evolved rather wild and free, without being subjected even to the size or the use of chemicals. During the last sixty years the vine has grown among the original flora of this terroir composed of native trees such as maitenes, culenes, hawthorns and mulberry trees, among others. It is the constant quest to obtain a unique wine thanks to the first qualities of the Carignan grape variety, a rare variety on the national territory that gave birth to the Villalobos winery. This one takes its meaning in the heart of Enrique Villalobos’ sculpture workshop in the Valley of Artists. The art of carving as well as the art of wine making evoke a union in the process of creation itself. Both rely on the transformation of matter made available by nature so that the artist can model it into a unique and unique work. It is in this context that this vineyard decides to move away from the traditional modes of intensive exploitation of monocultures. Our goal is to produce vintages that reflect the specific climatic conditions of the year and reflect their particularities. We will thus benefit from the unique, organic and wild quality of our vines that favor a harvest of grapes whose flavors and aromas are in harmony with those of the Chilean countryside. On the other hand, our philosophy is based on the unconditional respect of the environment and especially of the soil where our grapes are produced. For that, the steps of handling of the vine are carried out with the help of the horses as well as traditional tools which make it possible to regulate the vegetation. The harvest is done by hand, in the middle of brambles, wild roses and maitenes, difficult and laborious task because of the specific situation of these vines. Instead of filtering the wine through filtering soil, it is decanted several times. In addition, the pressing process is replaced by a decantation system of the wine flower, itself based on the law of gravity. The vinification is done naturally and the wine finishes its maturation in French oak barrels. This allows the production of a wine whose production is controlled and limited edition, but whose production conditions are unique and deserve to be appreciated in all their aspects.
Continue Shopping