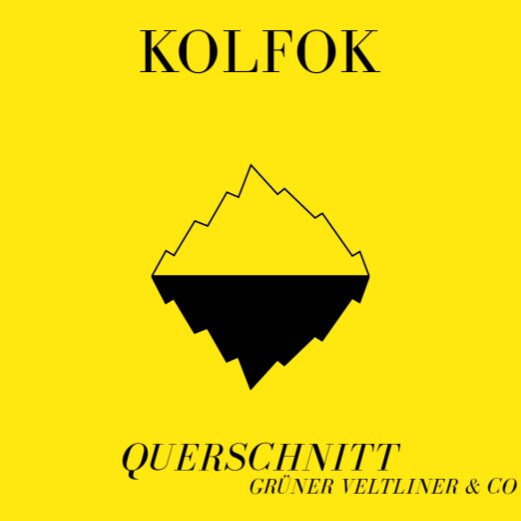 The youngest white wine is a mix of older and younger vines from all over Neckenmarkt, so it can perfectly show the different soils (schist, slate, gneis, limestone, clay). The harvest was separate for each variety. After the whole bunch pressung (without skin contact) fermentation took place in 600 liter to 1200 liter barrels Austrian oak. After the long natural fermentation in a cold clay cellar, the wine aged in the barrels without moving or adding anything on the lees. Just before bottling the varieties come together. Grüner Veltliner is always the dominant variety Chardonnay and Muskat just fine partners. The wine is unfiltered and slightly cloudy.
Download Pdf
About Kolfok

KOLFOK The word has it‘s origins in a regional Burgenland dialect and describes a person, critical to common thoughts - an unconventional thinker. WINERY The winery dates it‘s roots back to the early 19th century. At this time the region Burgenland was still a part of Hungary. Burgenland is now at the eastern end of Austria next to the Hungarian border and is very different to the other wine regions in the country. Some parts of the vineyards are directly at the border of Hungary, especially the town Neckenmarkt shows an unique combination of alpine soils and pannonian climate. In the middle of the Ödenburger Valley, Neckenmarkt is located at a relatively high altitude, the vineyards are up to 500 meter above sealevel and the soils are varied. In the higher parts soils range from shist, gneis to limestone, and in the lower vineyards from ferrous loam to vulcanic clay. I want to show those exceptional conditions in my wines. That‘s why I work natural both in the vineyards and in the cellar. To prevent monoculture the vines are growing organically togehter with other herbs and plants. In the cellar it‘s very easy - the wine leaves the press without the use of pumps into local oak barrels which can be from 600 liters (Halbstück) to 1200 liters (Stück), this is where it stays without fining, moving or even sulfering. At the optimum time they are bottled unfiltered with a minimal addition of sulfur.
Continue Shopping